On Sunday, January 26, 2020, music fans around the world waited with bated breath to see which artists, performers, and songwriters would be honored with a golden gramophone at this year’s #GRAMMYs.

One of the music industry's most coveted awards, a nod from the Recording Academy can be life changing, with peer-recognized awards going to everyone from Frank Sinatra to Frank Ocean over the awards’ 60-plus year history. These days fans and artists alike share their awards season reactions on social media. “Any newsworthy moment belongs on Twitter, and the GRAMMY Awards is one of the biggest moments in music,” says Mazen Alawar, managing director of marketing for the Recording Academy.

This year’s big winners included Billie Eilish, Lizzo, and Lil Nas X, and fans, nominees, and performers alike turned to Twitter to share their reactions. From the moment the red carpet was rolled out to the next morning’s news headlines, there were over 10 million Tweets about the event, with some of the most mentioned artists including BTS, Ariana Grande, and Demi Lovato.

Read on to find out how the 62nd annual GRAMMY Awards unfolded on Twitter.

For Alawar and his team, “Twitter is an integral part of our storytelling, and where we connect with conversations around everything music.” Playing a part in the narrative of this year’s awards began on November 20, 2019, when — in a first for the Academy — nominations for this year’s GRAMMYs were exclusively broadcast via live stream on Twitter.

Fronted by Gayle King and Bebe Rexa, the stream garnered over 3 million views, trending on Twitter throughout the day as artists and fans shared their excitement online. 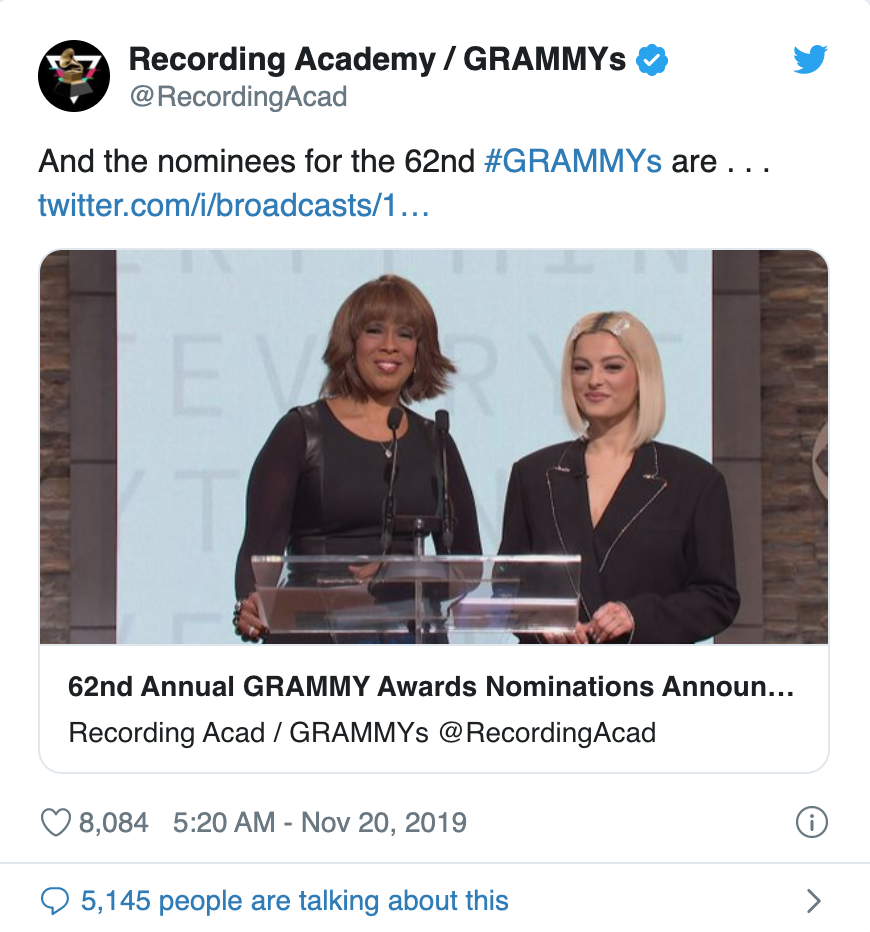 To give fans the opportunity to hear from their favourite nominees in the build up to the awards, the Academy worked on a series of exclusive Twitter Q&As with artists including Luis Fonsi, Social House, Maggie Rogers, Jessie Reyez, Offset, YBN Cordae, Cage the Elephant, and more.

Fans flocked to ask their favorite artists how they were feeling about their nominations, advice for budding musicians, and what they’re looking forward to in the coming year. The popular series led to four global trends across December and January.

To keep the conversation lively during the build up to awards night, the Academy offered up fun facts about the awards process, and throwbacks to iconic moments from previous shows, using the hashtag #GRAMMYVault.

Sharing past wins, memorable entrances, and GIFs of history-making performances reinforces the rich history of the awards, adding color to the Academy’s feed in between key dates, like announcements and the awards themselves.

Forget about stepping out of a limo in a suit or designer dress. @ladygaga turned heads arriving at the 53rd #GRAMMYs in 2011 in an egg 🥚: https://t.co/XMhZwmJfbL

What unexpected red carpet moments will we see this year at the 62nd GRAMMY Awards on Jan. 26? pic.twitter.com/ohQyg3Ezo3

RIGHT NOW! Watch GRAMMYs Live From The Red Carpet. The official livestream of the 62nd #GRAMMYs, with exclusive interviews and camera angles for complete coverage of Music’s Biggest Night. https://t.co/VjBqDov7yv

Live from the red carpet with #GRAMMYLive

Twitter partnered with CBS and the Recording Academy this year to bring their red carpet pre-show to the platform for the very first time. “GRAMMYs Live From the Red Carpet” attracted 4.9 million viewers, as fans tuned in to watch hosts Cassie DiLaura and Alina Vission interview nominees and discuss the looks of the night. Fans were also invited to submit their own questions using the #GRAMMYLive hashtag, allowing people from around the world to feel part of the event.

Not to be outdone in debating the merits of dramatic Giambattista Valli gowns and fluorescent pink cowboy outfits, E!, People, and Billboard also hosted red carpet pre-shows on Twitter, featuring interviews with artists including Tank and the Bangas and Lewis Capaldi.

As the awards were announced on stage, fans on Twitter got hear from the winners, straight from the press room. The Academy used Producer in Media Studio to live-stream the winners as they took questions from the press. Twitter and the Academy also partnered on eye-popping GIFs from backstage, giving fans and artists alike the opportunity to incorporate GIFs into their own Tweets.

These behind-the-scenes moments offered another opportunity to strengthen the connection between the Academy and viewers. As Alawar says, “The GRAMMYs are a worldwide cultural moment, and being on Twitter allows fans to be closer to it than anywhere else.”

“Audiences know that Twitter breaks information first,” says Alawar, “so those on the network tend to be engaged and are ready to actively participate in conversations — allowing us the opportunity to amplify the moment through them.” These conversations don't stop as soon as an event ends, so Twitter created a curated event allowing people to catch up on the GRAMMYs action — an afterparty everyone can join.