8 ways The Ringer’s #TalkTheThrones tapped into the GoT conversation

Send a raven — spring is here, and that means one thing: the return of “Game of Thrones.” The fantasy drama series based on George R.R. Martin's best-selling book series “A Song of Ice and Fire” needs little introduction — the quest to sit on the Iron Throne and rule the Seven Kingdoms has become a pop culture phenomenon since the HBO series first aired in 2011.

Debate about plot twists, direwolves, and ruthless deaths has captivated fans on Twitter. The platform has become the destination for dissecting various TV shows as they unfold, making The Ringer’s Twitter aftershow “Talk the Thrones” a perfect fit for the platform. Bringing together The Ringer’s pop culture experts, the show recaps the latest episodes, unearths things casual fans might have missed, and responds live to fan Tweets.

In honor of the eighth and final season of “Game of Thrones,” here are eight ways “Talk the Thrones” tapped into the conversation during season seven, and what we can expect this season from, as Chris Ryan, The Ringer’s editorial director puts it, the “pop culture Super Bowl.”

As Ryan calls out in the video above, “Game of Thrones” is a monocultural event — it brings vast audiences together for a particular moment in time each week. For “Talk the Thrones” to be a relevant part of the conversation, each show aired immediately on Twitter following the week’s episode. Graphics and callouts from the hosts promoted viewers to Tweet their takes and questions using the #TalktheThrones hashtag.

It’s not enough to have an hour-long Twitter talk show if you don’t signal how and when viewers can tune in. The Ringer used the 21st century equivalent of flying its house banners by publishing Tweets with viewing instructions and timings for each episode. These Tweets were posted and pinned to its feed in advance, ensuring fans didn’t miss a minute of the aftershow action.

Enjoy “The Spoils of War.”
Then come #TalktheThrones with us.
⚔ RT or LIKE ⚔ for a reminder before our #GameofThrones aftershow! pic.twitter.com/qz31Jmb85d 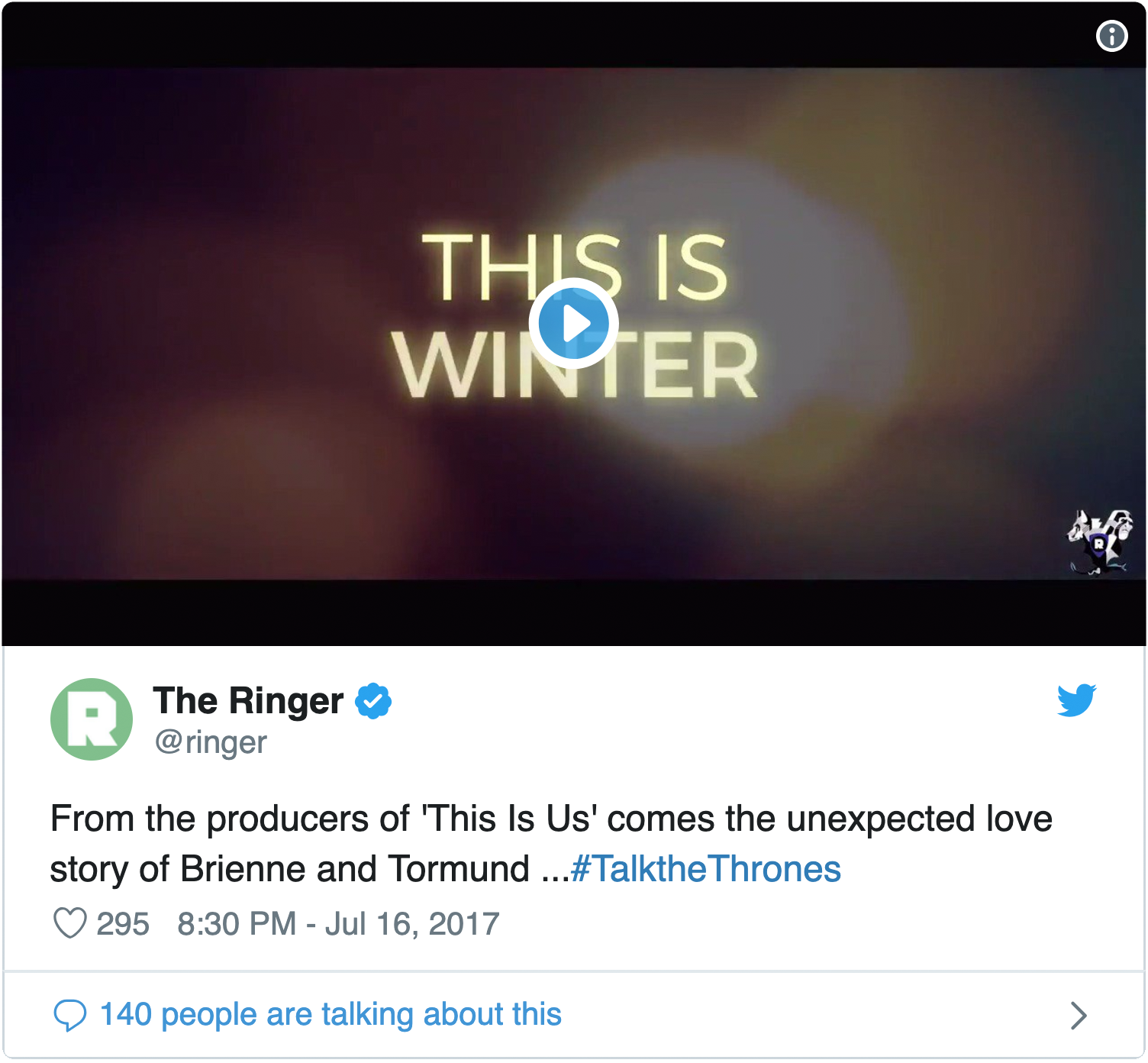 “Game of Thrones” inspires fan theories and “shipping” — the desire by fans to see two characters romantically linked — like no other show, and this is something the “Talk the Thrones” team has leaned into hard. Taking it one step further, the show created its own rom-com–style video trailer, delighting fans with spliced-together clips hinting at the attraction between Brienne of Tarth and Tormund Giantsbane. The trailer was viewed over 58,000 times, adding to the #Briemund conversation happening on Twitter.

Here for the highlights

Sometimes tuning in live isn’t always possible, especially when you need to lie down in a dark room and recover from watching one of your favorite characters get turned into a White Walker. For fans who couldn’t tune in straight away, “Talk the Thrones” produced edited clips under two minutes in length to share key moments from the show — such as who “won” the episode — in the days after it aired. This provided a great way to keep the #TalktheThrones conversation going, share discussion highlights, and promote the show itself.

If you ever betray me, I’ll burn you alive. Don't betray me. Watch #TalktheThrones live this Sunday after GoT! 🔥 https://t.co/OWVyCF9om7

One of the reasons “Talk the Thrones” works so well is the passion that exudes from co-hosts Chris Ryan, Mallory Rubin, executive editor at The Ringer, and their guests. Their fan theories and deep dives into each episode are fundamental to the show, so it makes sense that they want to promote each episode to their own audiences. Using quotes, emoji, and GIFs, Ryan and Rubin put their own twist on the larger narratives discussed in the live show.

Emojis bring a playful aspect to any Tweet, helping content stand out in a timeline. Substitute emoji for words and the inference of a Tweet can be even more loaded. #GameofThrones has its own custom Twitter emoji, but there are plenty of additional standard emoji that The Ringer deployed in its Tweets, such as the snowflake, crown, and dragon, that help allude to the content fans can expect from each episode. And one well-placed “Edvard Munch-esque face screaming in fear” emoji next to a Tweet about Khaleesi? That can create a FOMO feeling like no other.

We're live ... and still shaking 😱 🐉
Tweet us your thoughts with #TalktheThrones!https://t.co/x5Y7AVIX3y

Winter has arrived in Westeros, the White Walkers are marching south, and the wait is almost over for the final season of “Game of Thrones” and “Talk the Thrones” respectively. Fans of both shows are keenly aware, and to ignite the hype ahead of April, The Ringer took “Talk the Thrones” offline and to a live audience at this year’s SXSW festival. To ensure fans on Twitter were able to feel like part of the audience, The Ringer recorded the episode to share on its @binge_mode podcast, cross-promoting the show on Twitter to their shared communities.