10 Ways FIFA brought the World Cup to life on Twitter

Home to tens of millions of football aficionados from all over the world, Twitter is the platform of choice for soccer fans to learn the latest about their favorite teams during the tournament.

During the 2018 World Cup, FIFA teamed with Twitter to elevate the #WorldCup conversation across the platform. From Twitter Polls and trivia contests to exclusive emojis and FIFA-curated Moments, @FIFAWorldCup took its Twitter game to the next level during this year’s contest. Here’s how FIFA did it.

‘Greatest Ever’ tournament got fans excited.

The World Cup buzz began two weeks before the starting whistles sounded. FIFA got creative with Twitter’s Media Polls and launched a bracket-style tournament where soccer fans could vote on the “Greatest Team” in World Cup history. This poll proved so popular that FIFA rolled out another Twitter Media Poll asking fans to vote for the greatest player of all time.

(Spoiler alert: Uruguay, and the star of its 1950 championship squad, Alcides Ghiggia, won both brackets! More about the World Cup brackets can be found on FIFA’s blog.)

🏆 Today sees the final of our #WorldCup #GreatestTeams bracket, with over 250,000 votes submitted so far! And it's an all-Uruguayan affair:

Which teams will YOU pick to be the champions?

🗳️ Look out for our video later to cast your vote! pic.twitter.com/s82ipMwAQ0

🤔Which #WorldCup winner gets your vote?#GreatestPlayers

In addition to the Media Poll bracket challenges, FIFA utilized Twitter’s ‘Tweet to Unlock’ Cards to create visually appealing trivia challenges for fans. After being shown a snippet of footage from a historical World Cup match, the #WhatHappensNext Tweet prompted fans to vote on how they thought the clip ended. After they Tweeted their guesses, fans were able to find out if they were correct. 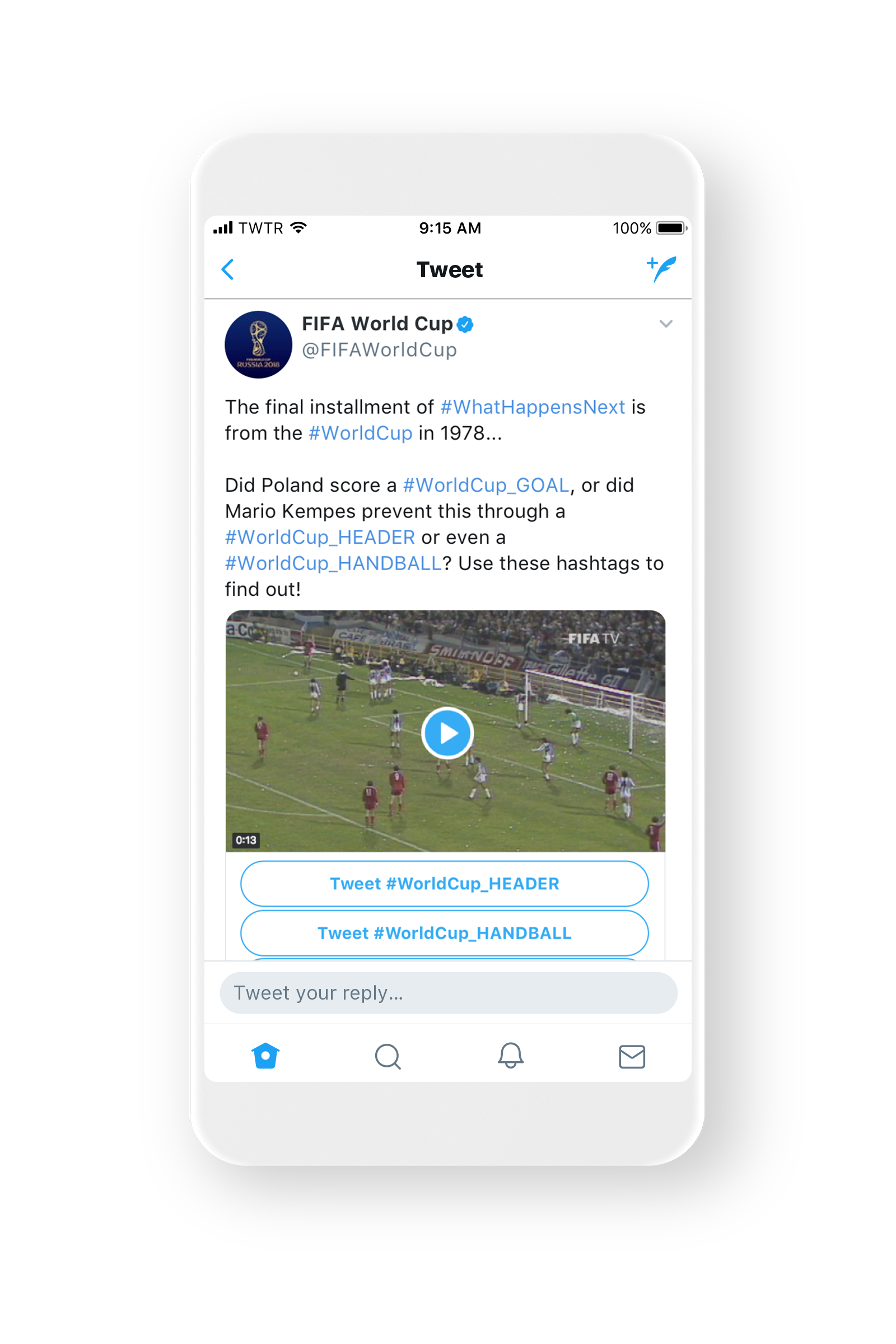 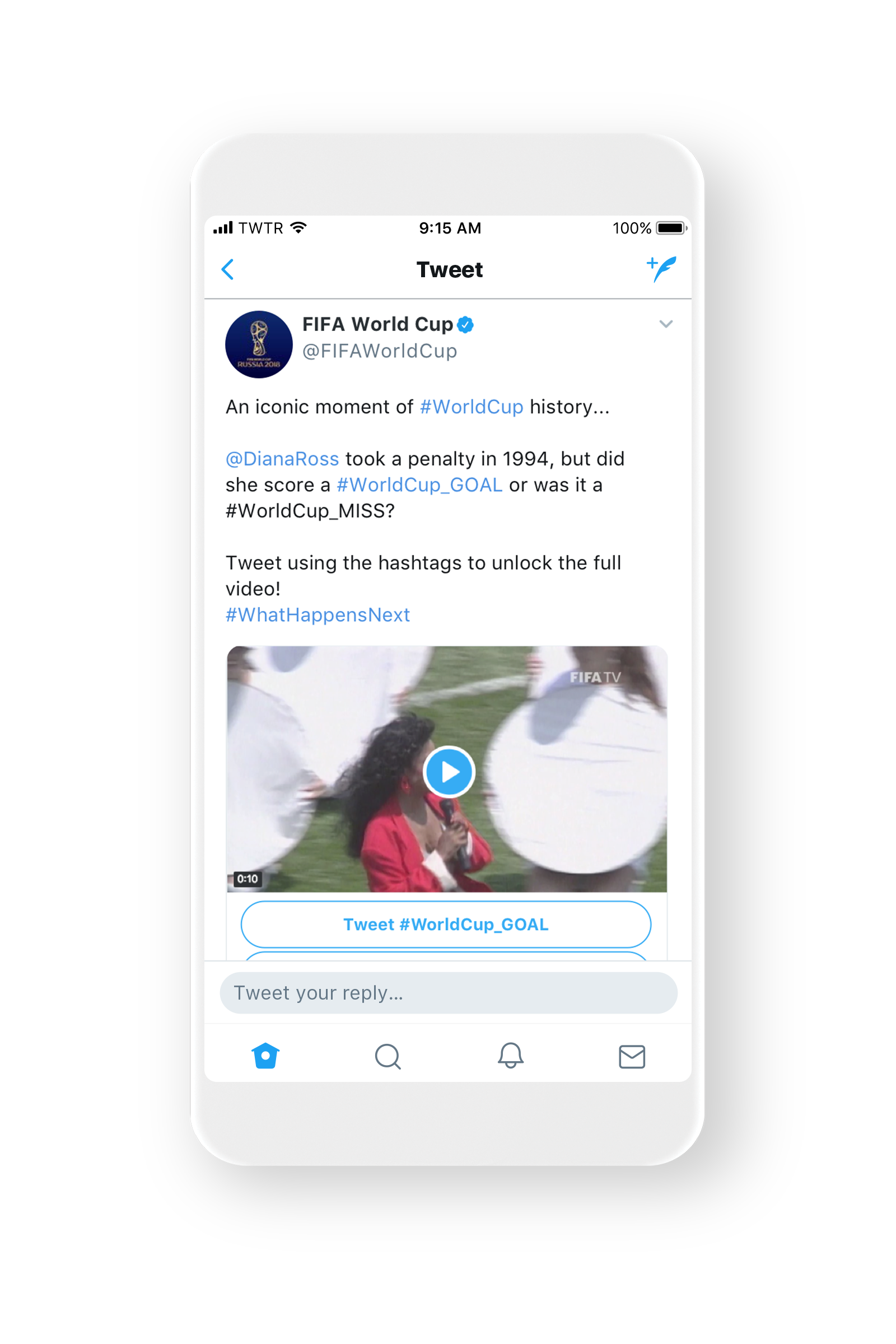 Match Day Programmes were a series of FIFA-curated Moments that provided a crash course on each squad before every match. After FIFA Tweeted to announce the start of a Match Day Programme, fans could Retweet or ‘like’ the Tweet to subscribe to a Moments series released before each game.

Can't get enough of the FIFA #WorldCup right now? Like or Retweet this to subscribe to the Match Day Programme! #FIFAMatchDay pic.twitter.com/VYSR2fn0PT

Lists of verified reporters kept team faithfuls in the know.

The World Cup knows no borders, so FIFA aimed to ensure that fans from around the globe could keep up with the latest from the tournament, no matter what language they spoke. To make World Cup information accessible, FIFA created a list of the Twitter handles for their official local team reporters. Fans and publications could then follow their team’s verified reporter, or subscribe to the complete list.

Want to get exclusive, in-depth coverage for YOUR team at the #WorldCup? 🙌

Make sure you follow our team reporters today 👇https://t.co/S46s8KkeGj

Hope you can hear me over the traffic 😉https://t.co/DWmgBqpfie pic.twitter.com/GUVmgHnvat

THANK YOU so much for following me throughout @NGSuperEagles @FIFAWorldCup journey. You welcomed me so warmly in Naija family 🙏 What an honour and privilege it has been to experience this special time with all of you. I hope you enjoyed the coverage! 👊🇳🇬⚽️ pic.twitter.com/ZEZ8rKWQzT

Your phone wallpapers for the qualified teams in Group G 🙌#ENG #BEL pic.twitter.com/zEuYVuVgI2

FIFA gave fans access to premium imagery to use during the tournament, by releasing exclusive phone backgrounds they could save directly from FIFA’s Tweets.

Timely Tweets made sure fans never missed a match.

Leading up to each match, FIFA Tweeted out reminders to fans, telling them where they could watch the game on television or follow along on FIFA’s live blog. The Website Card included an animated video that introduced each team’s starting lineup, as well as a link to watch the game’s highlights afterwards.

Every goal got its own GIF.

When they weren’t watching a World Cup game, fans were constantly refreshing Twitter to find out what was happening with their favorite teams. In response, FIFA created animated graphics it Tweeted the moment any goal was scored. The vibrant GIF stood out on fans’ timelines to make sure they found out about the game-changing news, right after it happened.

FIFA and Twitter collaborated on a video to announce the launch of an exclusive emoji that appeared at the end of the #WorldCupFinal hashtag. In addition, each participating country had an associated custom emoji, and the tournament’s mascot #Zabivaka got his own, too.

The biggest match in football deserves an emoji, don't you agree @FrenchTeam / @equipedefrance and @HNS_CFF?

Next-level video brought the World Cup home to everyone.

From memorable moments to promotional videos and exclusive behind-the scenes footage, FIFA made the most out of Twitter videos during the World Cup. The FIFA account consistently used video to pump up fans before the tournament began, and continued into the hours leading up to the final (even giving fans all-access passes to teams’ pregame antics). At the end of each day of World Cup play, FIFA shared the most memorable moments on Twitter, too.

Matchday 6, let's do this 💪#WorldCup pic.twitter.com/hTZhuFRRNE

Who will be next to lift the #WorldCup Trophy? pic.twitter.com/qZtsNXJ2T3

When you bring a rubber chicken to training... 🐔😂@England // #WorldCup pic.twitter.com/qRZCxxiZt0

When you bag a stoppage-time stunner at the #WorldCup 🙌@ToniKroos

With so much World Cup chatter happening on the platform, FIFA stayed at the forefront of the conversation by being current and conversational. The FIFA account Tweeted calls to action, funny reactions, and quirky statistics, keeping fans engaged.

There are no #WorldCup matches tomorrow... 🙁

If you've got plans, cancel them. #WorldCup

Elation for Belgium, but utter heartbreak for #JPN

Thank you for contributing so much to a #WorldCup classic and for everything you've added to Russia 2018, Japan. #WorldCup pic.twitter.com/rtd3xUrEyj

So, um, who else is missing the #WorldCup already? ☹️

Not the most useful of stats, but there you go. #SRBSUI pic.twitter.com/80WOGGNYhg

Even after France took the trophy home, the conversation continues on Twitter. From underdog triumphs to penalty kick wins, @FIFAWorldCup led the charge to keep fans engaged and up-to-date. Today fans can visit the Twitter archives to relive the triumphs, heartbreak, and community of 2018 FIFA World Cup as they wait for #WorldCup to arrive.